So, I know I promised an "All About Luke" post right after we brought him home, and I totally dropped that ball, sorry! But I am making up for it by posting this update. :)


Luke is now three months old, as of June 25. He has quite a personality already and LOVES to smile. He is just beginning to laugh - a little cackle that blesses my heart so much. Luke rolls over accidentally sometimes from his stomach to his back.


Everyone always asks how he is sleeping . . . Luke prefers to sleep on his stomach and is sleeping about 5 or 6 hours in a row at night. This is great, considering when we first brought him home, he was only sleeping 2 hours at a time!

Luke likes to sit in his bouncy reclining seat and he loves to watch me do whatever I'm doing. If I'm not talking directly to him, he usually makes sounds to get my attention. He loves to "talk", ranging from the traditional goos and gahs to more eccentric squealing and interesting gurgling sounds.

Luke eats formula. Hampton keeps threatening to give him a "taste of sweet tea" or a "little bit of this french fry" - but I'm making him wait to taste real food until he's 4 months old. We'll see how he does with some healthy mashed carrots or oatmeal or cereal in a few weeks!

One major event that many of you saw on facebook was Luke's first time in the swimming pool. He was really apathetic about the whole thing - didn't smile even once, just let me hold him in the water. Hampton even swam around with him some and he didn't bat an eye. I think he was kind of sleepy, so we'll have to try again when he's more alert. Good to know that he didn't hate it though!

Hope you have enjoyed this update! I will try to keep these going and blog about some other stuff again too! :) 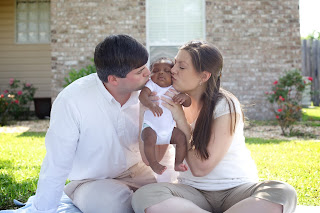 Email ThisBlogThis!Share to TwitterShare to FacebookShare to Pinterest
Labels: Luke